The Art, Music, and Movement of Autism: Discussing Alternative Therapies

Approximately 25% of adults on the autism spectrum report feeling anxious towards the world around them, and it goes without saying that navigating the countless therapies, medications, and other strategies designed to combat these feelings can be daunting. Given that autism is a spectrum disorder, the general consensus is that treatment should be considered on an individual basis, but promising trends and insights, such as those found in art therapy research, should be explored. Up until this point, much of the empirical research in art therapy has been on children with autism. However, with 500,000 individuals on the spectrum aging out of services in the next 10 years, it is vital that we, as a society, understand how art and other alternative therapies could serve the growing population of autistic adults.

Current studies suggest that art therapy (including paint, drawing, dance movement and music therapies) may help adults with autism communicate with others and form better connections with society, as a whole. Considered “alternative” by some, art therapy typically accompanies more traditional interventions, such as medication and psychotherapy. Art therapy has been shown to be particularly beneficial to individuals with autism because it plays to individual strengths. Jill Schlieber PhD, art therapist and co-founder of Make Studio, an organization in Baltimore that aims to bring art to adults with disabilities, asserts that while “art therapy does not improve the mechanics of communication, like sentence structure and use, it has shown to improve social reciprocity.” This means that people who engage in art therapy have been shown to better communicate back and forth with others, which can be a challenge for some adults with autism. Another aspect of art therapy that can help facilitate communication is that it usually occurs in a group setting. Dr. Schlieber reflected on her days as a school art therapist in which she observed a class of individuals with autism who had attended class together but had never talked to one another. Despite the students’ initial reluctance, over the course of a couple of months, they were not not only able to better converse amongst each other but also share ideas and work collaboratively. 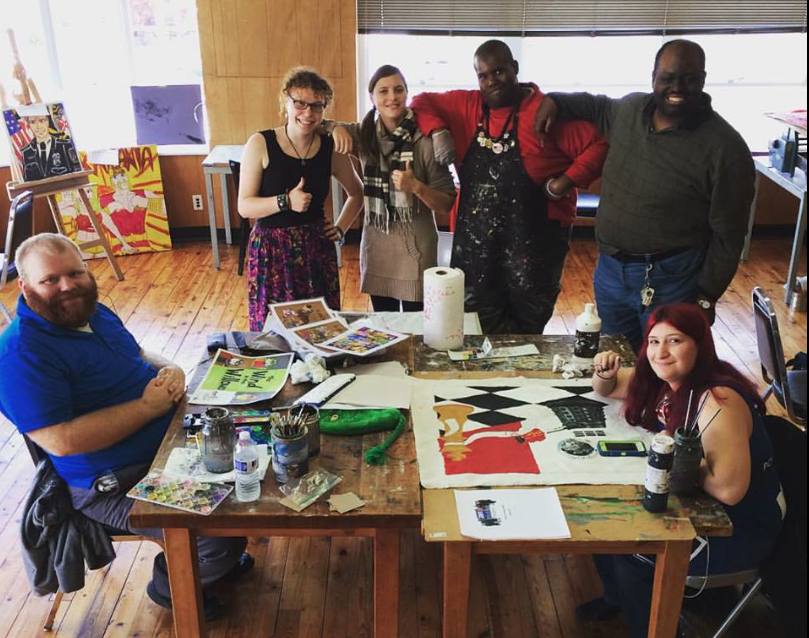 Art therapy provides unique opportunities for adults with autism by allowing them to enhance communication skills. For example, research indicates that it may be helpful for individuals with social anxiety because they are able to communicate in a less intimidating, nonverbal way. Day programs and other service providers may find that art therapy programs are a fun and non-confrontational way to engage adults with autism while also promoting independence. Service providers use art in various capacities, including as recreation, therapy, or even as a means of employment. There has been an abundance of new advertisements for art therapy that may be be causing public misconceptions. For instance, some are suggesting that adult coloring book can be used as a type of art therapy. While it is true that adult coloring books can help relieve stress, it is important to understand why this activity is not classified as a type of art therapy and is instead considered as a form of recreation. The distinguishing characteristic between art as recreation (e.g. the use of coloring books) and art as a therapy is that while they both can relieve stress, there is a final goal in art therapy such as increasing communication skills or dealing with challenging emotions (e.g. anxiety). The distinction between art as therapy and art as employment is that individuals on the spectrum who use art for employment may experience more anxiety than people who do it for fun or as a means of therapy. This is usually due to the pressure of deadlines and other professional demands. In addition, the purpose of the art as employment is typically determined by what the client wants as opposed to the artist’s desire.

Music therapy, a type of art therapy, uses music to reach an individual’s personal and treatment goals. Music therapy can be utilized by trained facilitators to help their autistic clients relieve tension, deal with problems, or help people make connections with their social environment. Through music therapy, individuals with autism are able to learn about the world around them without having to face anxiety that may accompany social interactions. Music therapy can also create a sense of inclusion in autistic adults who may otherwise find it hard to to function in society. This is because, by listening to music, individuals are able to better grasp their surroundings and are able to connect with people in a nonverbal way.

Music can positively enhance the moods of individuals on the autism spectrum, which can be useful for an adult with autism who is experiencing anxiety or depression. This was demonstrated in 2009 when Elizabeth Hill, et al. conducted a study to determine how adults with ASD experience music. Her team studied a sample of 12 high functioning adults with autism (10 males and 2 females with a mean age of 41). Participants completed questionnaires before, during and after the intervention documenting their feelings towards the lyrics and the music itself. Hill’s team found that music positively altered the moods of their participants by exciting or relaxing them. Before the intervention, four participants in the study reported feeling undesirable levels of tension, and the music relieved this feeling.

Often used in conjunction with music therapy, dance/movement therapy (DMT) can also be a helpful option for adults with autism. DMT is the use of “movement to further the emotional, cognitive, physical and social integration of the individual.” DMT is primarily used to assist individuals in understanding and regulating their emotions, feelings, thoughts and bodies.

In 2013, Daniel Mateo-Moreno and Lidia Atencia-Doña conducted a study to see what effect DMT combined with music therapy would have on adults diagnosed with severe autism. They hypothesized that DMT combined with music therapy would be effective if the adults did it regularly. There were 16 participants in this study; one half was put in the control group (meaning they did not take part in dance movement therapy) and the other half was put into the experimental group (they received combined DMT and music therapy two times a week for a total of 36 sessions). Mateo-Moreno and Atencia-Doña found that adults who regularly received the combined DMT and music therapy were better able to moderate their behavior than the control group. The results of this study show that adults with autism who engaged in DMT saw improvement in modulating their emotions and avoiding extreme mood swings and aggressive or possessive attachments. The researchers believe that this is because is thought to be because those who engage in DMT are more aware of themselves and others. This study suggests that DMT combined with music therapy may have positive effects on some adults with severe autism.

DMT may provide adults with autism an opportunity to have meaningful interactions with their family members and peers. Doctor Ashlyn Smith of the Hussman Institute, an organization that works to meet the needs of families and individuals with autism, intimated that “one mom who comes to the Hussman Institute participates in yoga every Saturday with her daughter. It’s something that they enjoy doing together, and it is often hard for parents and children to find activities that they can enjoy together.” She went on to say that “[art therapy] might not reduce some of the core deficits [autistic adults] have, but if it’s something that they can do and do well, then it is effective in its own right.” Watch the inspiring video (below) from the American Dance Therapy Association below to learn more about DMT from Christina Devereaux, PhD, Director of Clinical Training in the Dance/Movement Therapy program at Antioch University New England.

In 2015, one research team hypothesized that a body-oriented treatment, like DMT, is needed among the autistic community. Sabine Koch, et al. conducted a study to determine if DMT increased body awareness, social skills, empathy, and psychological well-being in 31 high functioning adults with autism. The study found that DMT did increase body awareness, social skills, self-other distinction, empathy, and well-being in their research participants. Their findings suggest that mirroring movement in young adults with ASD may produce positive effects on some individuals’ emotional and cognitive well-being.

While the studies cited in this article show promise in unveiling the potential of art therapies in assisting autistic adults, this research must be expanded in order to build a stronger understanding of its impact. The few existing studies have small sample sizes, which indicates an inadequacy of funding and resources in this area of research. Studies performed on small sample sizes create problems as they cannot be generalized to the broader population of adults with autism. Another flaw in existing research is the underrepresentation of women. Although autism is five times more likely to affect men than women, it is still important research on this demographic. It is easy to assume that these findings are as applicable to females as they are to males, but, again, what is best for one person may not be best for another.

Dr. Schlieber said that “art therapy encourages the self-expression of individuals with autism because it builds on interests that are already present.” Many people think that art therapy can only help children or nonverbal individuals, but it can be useful to a broad range adults with autism, especially those who already have an interest in art. Art therapy can enhance moods and emotional wellbeing and may help individuals process their own emotions and understand the emotions of others. It can be an effective tool in helping adults with autism better understand the world around them and form more positive relationships with friends and family. The most important take-away from this research is that autism occurs on a spectrum, and what is beneficial to one person may not apply to everyone. Dr. Schlieber said that one of the strengths of art therapy is that it is meant to be personalized to suit individual needs and that although some may have more profound results than others, overall, she has never had a client who didn’t gain something positive from art therapy. 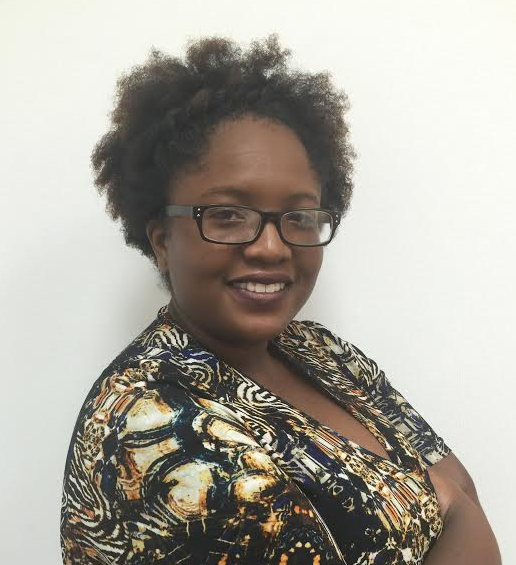 Originally from Fayetteville, North Carolina, Sydney is a psychology student at University of Maryland, Baltimore County. As Research Intern at Madison House Autism Foundation, Sydney hopes to further her goal of working with children on the autism spectrum as a clinical child psychologist while understanding the lifelong issues impacting individuals with autism as they age. In her free time, Sydney likes to read and hang out with her friends.