Home / Blog / A Mother’s Perspective: “The [Future] World as I See It”

A Mother’s Perspective: “The [Future] World as I See It”

When I saw the posting for the communications internship at Madison House Autism Foundation in January 2013, I applied almost immediately. I knew it was a place I wanted to be. My journey towards acceptance of my young son’s diagnosis of high functioning Asperger’s and ADHD has been a long one– with starts, stops, and detours. Given that the crooked path we were on, and continue to be on, was not without reason, it occasionally seemed as though his diagnosis was incorrect. Then would come the reminders, mainly in the classroom, that he obviously he had some struggles.

Before coming to Madison House Autism Foundation, I had rarely thought about what life is going to be like for my son when he finishes high school. Frankly, I couldn’t think about it for long because I was (and still am) just trying to figure out elementary school. I see that the early intervention he has received has been beneficial. I also believe that, because of what is being done now, things will improve by the time my son graduates. Being at Madison House and learning that there is a movement to address the issues of adults with autism gives me hope.The work can only move forward.

I mentioned my son’s diagnosis to a friend once, and she said, “Well, you know they believe Albert Einstein had Asperger’s.” My mind wandered- well, actually dreamed, “A budding Einstein? Whoa!” I came out of the clouds moments later as I realized that, Einstein or not, he was the best thing that has ever happened to me and my family. Nevertheless, I salute Einstein, whose 1949 book was the inspiration for the title of this blog, for proving to the world that we all, regardless of our differences, can contribute great things to society. And that’s another message that Madison House Autism Foundation wants the whole world to remember.

In those moments where I worry about the future, I just remember what one mother said to me at Madison House’s photo shoot for its Autism Awareness Month billboard in Times Square. As the parent of her own young adult son with autism, she imparted, “Your son? I can tell. He’s going to be just fine.” 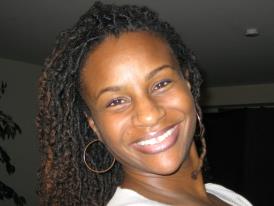 Jacki Lewis is a full time student, completing her BA in Communications Studies at UMUC at Universities at Shady Grove. She earned her associate degree in Communications in 1989 and worked at the International Monetary Fund for 20 years in human resources before deciding to continue her education and change careers. She is also a board member of Lyn “Dancn” Club, Inc., an urban line dance group located in Mitchellville, MD. She came to Madison House Autism Foundation in January 2013 as a Communications Intern because she wanted to use her skills to support its mission and spread awareness on the need for residential options for autistic adults.