Insights on being a father of a son with autism from Clarence E. Schutt, professor, research scientist, philanthropist, and parent. 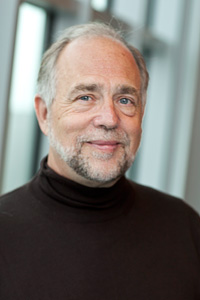 “Sometimes friends worry that if they talk about their children’s college, or athletic involvement it will somehow be upsetting. But I’ve never experienced that ‘what if’ syndrome.  Watching a father playing catch with his son, I’ve never thought, ‘I wonder if Alex would have made a great short stop.’  Alex hates to play catch. The experience of a ball coming at him is too much, either it’s too fast, or the sensory experience is fragmented, or it trips a fear response, I don’t know. He’s just my son.  And I look forward to being with him.

When Alex was diagnosed, it was thought then that autism affected one in 10,000.  The pharmaceutical industry was not interested.  Genetics were unexplored.  But fathers do all they can do figure out a way.  Most fathers try to take their skills and apply them to the cause – lawyers advocate, doctors look at treatments, we begin to dedicate our professional lives to making life better for people with autism.  As a molecular, biological, chemical scientist, of course I wanted to look at what can be done. My early lectures tried to create a scenario for a future without autism.  I would make up what could happen and talk about how we can make it happen.

My work with autism has been very much influenced by my early work in HIV. Back then, in the early ‘80’s, people were really frightened about what could happen with HIV.  We thought then that the virion could be captured by the common cold – it was a scary scenario. But we galvanized forces and we showed that a huge problem could be solved. I learned a lot from that experience.  And I use the HIV response as an example to focus our efforts for autism. I have great hope. First, a father will do anything for his family. He will make any sacrifice. Second, people will reach out in empathy to you- they will support you, work with you, and join you. You can see their empathy reflected back in the faces of people who are hearing your story. And third, if people can identify the essence of something, they will find the answer. However hopeless the diagnosis of autism seems, things are beginning to fall into a pattern. We are learning things. We have hope.

I also have a grandfathers’ day message:

I often meet grandfathers who don’t know what they can do for their autistic grandchild. The normal role of a grandparent is to babysit but they often can’t handle people with autism.  They ask themselves, ‘What can I do to help?’ Many of them fall back on their life skills – they try to apply their talents whether it’s organizing a recreational project or just doing something small in their community.  A cookbook to raise money may only bring in $200 but someone will match it and it becomes $400 and the school buys something important and it just grows from there.”

Clarence E. Schutt, Ph.D., is Director and Chief Scientific Officer of the NLM Family Foundation. He is also a retired Professor of Chemistry at Princeton University, where he was also associated faculty of the Molecular Biology Department and a member of the Program in Neuroscience. Dr. Schutt served as chair of the National Alliance for Autism Research, which has since been incorporated into Autism Speaks. He is the parent of an adult son with autism and has written insightful, compassionate blogs about his and Alex’s journey.

Words From Brent Wood: A Grandfather’s Wisdom
The Arts for Autism: Meet the Artists