My Autism Story | Bill Boutin: From Childhood to Fatherhood

When I was real little, I was just a weird kid. I was a bit late in talking and walking as well as very introverted and withdrawn. My Dad had just said I was just lazy and wanted everything to be handed to me. I didn’t like sports or working with cars like the other boys. My main interests were in radio and electronics, writing and music. I was good at math and science, and I could read and speak at college-level by the age of ten, which I recently learned is a savant skill known as hyperlexia.

Because I was always extremely verbal, people considered me to be “smart.” Because I was “smart,” when I did not get good grades, it was my fault because I did not “apply myself.”

Also, because I was so smart, I should have “known better.” When the other kids teased me, it was my fault for getting upset and “flying off the handle.” Sometimes I could blame my temper on my French ancestry, but that didn’t always work.

So, school was very difficult for me, mainly because of not being able to “get along.” My dad refused to accept the fact that I was “different” in some way, I think he resented it, in fact, as I learned later he had a lot of trouble as well. He literally tried to beat it into me that I had to be “just like everybody else.”

Studies for me were either very easy or very hard. I loved science and math, and, of course, I always did well with English, but “social studies” and history were difficult.

I have loved music for as long as I can remember. I was in the band in junior high and high school, and that’s when I started actually writing music. I wrote a few pieces for trumpet, which I played, and clarinet, which a friend played, then in the summer of 1971 I wrote out an original song for a local community band, writing all the parts for all the instruments by my own hand. It got played through once then promptly forgotten about, but it was a good experience.

My main interest in writing during high school was in science fiction, I grew up reading classics by Robert Heinlein and Isaac Asimov, among others.

Problem is, I was actively discouraged from both writing and music because they weren’t “practical.” Again, I think my parents may have resented my talent, because I have seen examples of creativity in both my parents (my dad was an inventor in fact), but they were frustrated because they couldn’t “make a living at it.” 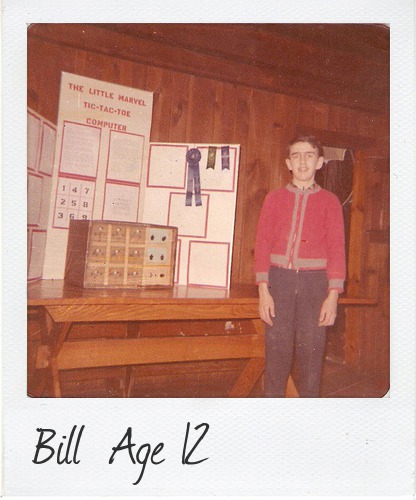 I built my first crystal set (remember those?) when I was ten. When I was twelve, a science teacher suggested I make a machine that could play tic-tac-toe for a science project. I had no instructions on that so I had to figure it out for myself.

I played the game with my mother and figured out there were slightly over 1000 possible moves, if I remember correctly.  I figured out a way to make it work with lights and switches, the only problem was you had to tell the “computer” by means of a selector switch what your first move was. It had some problems too because I didn’t have enough of the relay parts I needed to make the  computer “decide” which square to light in certain situations.

That was in seventh grade, and it made it all the way to the state level. At the state fair, I saw my first “real” computer, about the size of a dishwasher, and it also played tic-tac-toe, so I asked the people running it how they managed to work out the kinks. I also remember seeing other projects using circuits, which I wish I could have put in my project, only I didn’t have the information needed to build them.

The summer after that, I went to the library, took out a book and learned Boolean algebra in order to fix my computer and make it totally “automatic.” I started basic logic gates and learned the basics of the “binary computer,” which in 1967 not many people knew much about, but that earned me the nickname “computer” in eighth grade and even later, which I hated.

Another reason I didn’t get very far was that I was constantly being punished for not being able to get along with the other kids.  Since I couldn’t “behave,” the “privileges” of doing what I was good at (what I wanted to do) were taken away from me.

For eighth grade science I did build an electronic “organ” but was unable to tune it to a proper music scale. Integrated circuits had just come out in the electronic hobby stores that existed at the time, but they were expensive. I still wanted to make the tic-tac-toe computer work, and I spent a lot of time making different diagrams for it, but then it got put aside, and when I got back to it, I couldn’t remember what my diagrams meant.

In fact, it was mostly my job to take the trash out to the landfill we had in back. Now, I have no sense of smell, and once out there, I got sprayed by a skunk and did not even know what it was until I got back in the house and saw everyone else’s reaction.

Working on a farm was not a problem – you knew what was expected. I hated pulling weeds out in the hot sun, but I didn’t mind taking care of the animals. We also had a field where we grew hay for the cows, so we would load up the bales onto a wagon and stack them in the barn. We also had to “pick rocks” every year because they were so abundant in southeastern Connecticut, it’s like they came back every year.

Later, when I started working outside the farm, it was a different story. Back then the only work I could find was washing dishes in a restaurant, and since I couldn’t read the boss’s mind and anticipate what he wanted (or even at least “look busy”) – even though I had done all the work and couldn’t find anything else to do at the moment – well, I kept getting fired.

When I graduated high school in 1972, I didn’t really have any good job prospects. I wanted to go into electronics because that was still considered “practical” at the time, but I needed more education. I wanted to go to college, but I couldn’t mainly for financial reasons. The only think I could think of was to enlist in the Navy in order  to get an education, but what I got was three undocumented “psychotic breaks” and an honorable discharge for “unsuitability” with no benefits for my trouble, but that’s a story I’ll save for another day. 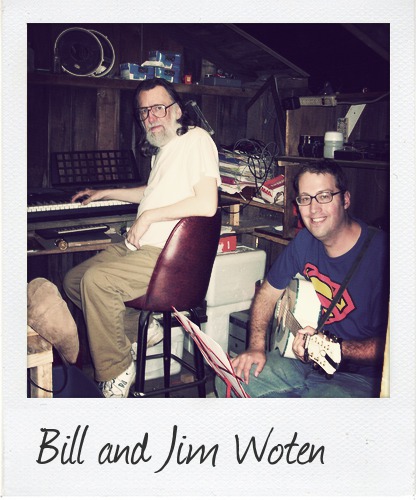 To “fast forward” quite a bit, I finally got work in electronics through sheer hard work and determination, and even studying while working eighty hours a week at a bakery. But because my Autism was never properly understood, I still had a lot of problems dealing with people. Then again, I was supposed to be “smart enough” to figure this all out, so I ended up with a lot of anxiety and depression, ending up with several hospitalizations, misdiagnoses, improper therapy, and many different medicines that did more harm than good. All in all, it was a very rough time even after I got on disability.

In 1989, I was asked to become part of a theatre troupe called the Second Step Players of Norwich, Ct. that used comedy and live theater to educate the community about the myths and misconceptions of mental illness. I worked with them for two years. I did some acting and writing, mostly I produced original music for many shows in a four-track home studio I built myself.

In 1995, in Clermont County Ohio, I worked with the local mental health board and got a mini grant to start a similar project there called Creative Sanity. I bought some equipment and did some shows for demonstrations, but there were problems with the local “peer center,” so the project never really got off the ground.

I moved to Allen County Ohio in 2004, and shortly thereafter, I tried bringing my show here.  I got together with a guitar player, a good friend named Jim Woten, and he and I did some shows until he moved away a few years ago.

I was working with the mental health board again locally until one day the bottom just fell out of the budget. I was working on a new project, and getting all my materials together for the director of the board to promote it, and then, when I went to his office, he reported that they’d just lost almost half of their budget, so we would not be able to go ahead.

Since then, about the only activity I get locally is to play at the bar behind the house for free and hope they don’t turn the juke box on, which they are likely to do as many of them like their music a lot louder and rowdier than what I play. 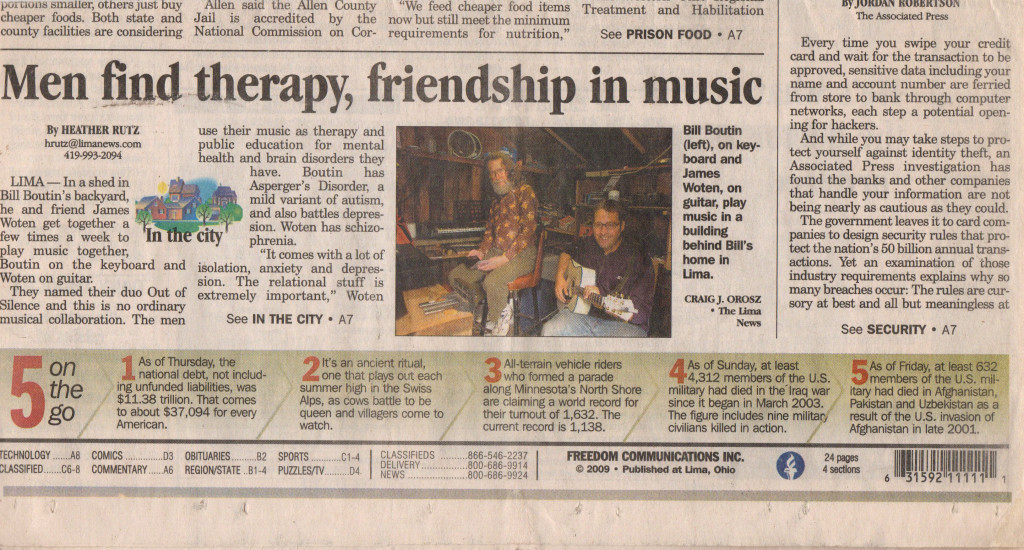 Most recently I did happen across a local TV spot one day about the new mental health “drop in center.” They were looking for volunteers to come down and play music and have other activities for the clients. Since there was a new director of the center, I thought I would meet her and show her my work.

I showed them all my clippings from the Second Step Players, the TV shows I had been on, the work I did in Clermont County in pitching Creative Sanity once again, as well as my hope to put on some performance for Mental Health Week In October. The director sounded interested at least, then went on a month long vacation for “most of September,” so I never did hear from her again. They said that they had to run it by their “boss” (a private not-for-profit that gets “alternative funding”), but they didn’t want to be “limited” by my ideas.

I’m grateful to Leonora Gregory Collura and Tim Pylipiuk of the Internationally Autistic ANCA community for at least giving me an opportunity to share my work.
I have also shared my work on youtube.com/billboutin1 and audio recordings of my mental health skits on soundcllick.com/billboutin. These can be downloaded for free, which other mental health advocates have done.

I have been married since 1976, and my wife Margaret and I have had three children together, all on the Autistic Spectrum. Robyn, born in 1978, passed away from cancer in 2013. She just missed her 35th birthday. Rebecca, born in 1980, has a Bachelor of Fine Arts in Graphic Design and works at Artability here in Lima Ohio as a freelance artist. Matthew, born in 1986, has a Master’s degree in Environmental Science, does volunteer research, and is currently looking for work. 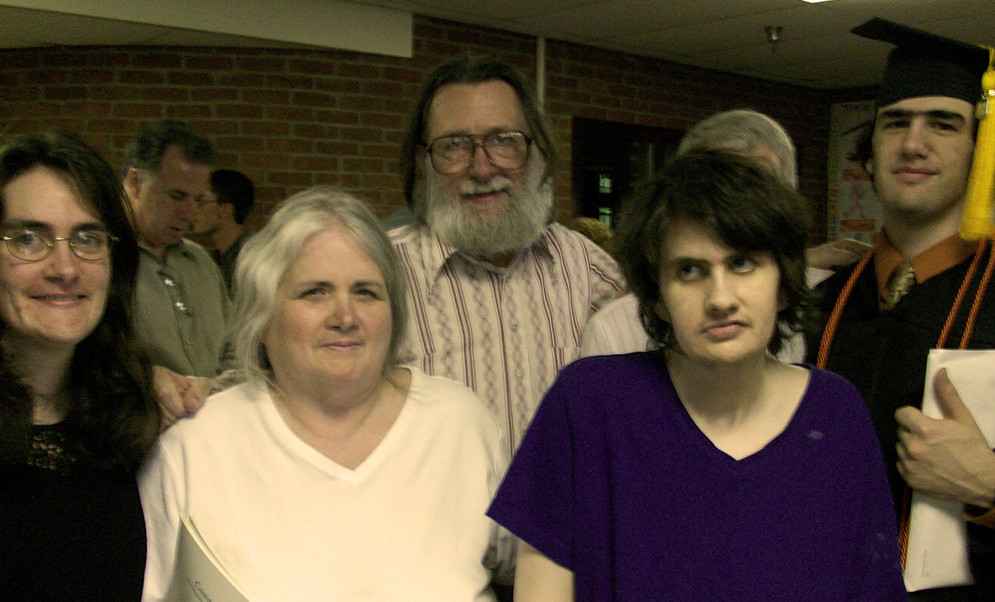